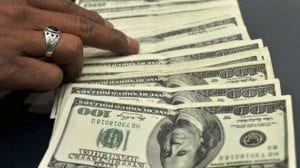 By BY PAUL WISEMAN

WASHINGTON — The Federal Reserve’s decision to maintain the size of its economic stimulus could be a gift for car and home buyers, for Americans with 401(k) accounts and perhaps for developing economies.

Yet for savers who rely on interest income, Wednesday’s announcement was a sour one. The Fed also sent an ominous message to job seekers: Hiring and economic growth remain sluggish and vulnerable to further weakening from budget fights in Washington.

The Fed surprised just about everyone by delaying a slowdown in its $85 billion in monthly bond purchases, which are designed to keep long-term loan rates low to spur borrowing and spending. Fed officials had been signaling since spring that they would likely start reducing their purchases by year’s end if the economy steadily improved. Many economists and Wall Street banks had expected that pullback to start this week.

But on Wednesday, Fed officials made clear they aren’t yet satisfied with the economy’s progress.

“Conditions in the job market today are still far from what all of us would like to see,” Chairman Ben Bernanke said.

Here’s how some individuals and groups could be affected by the Fed’s decision:

■ Retirement and other stock investors:

Financial markets celebrated the Fed’s delay. The Dow Jones industrials surged more than 1 percent to a record high of 15,677 before retreating slightly Thursday.

It’s no wonder investors were ecstatic: The Fed’s bond purchases could hold down yields on long-term bonds. Low bond yields cause some investors to shift money into stocks in pursuit of higher returns. That money tends to boost stock prices.

Driving up stock prices is part of the Fed’s plan. That’s because as stock prices surge, Americans who own stocks feel wealthier and more willing to spend. This is important because consumer spending accounts for about 70 percent of U.S. economic output.

The Fed’s bond purchases benefit borrowers by pushing down long-term interest rates. The yield on the benchmark 10-year Treasury note dropped sharply after the Fed announcement. Rates on mortgages and many other consumer and business loans tend to parallel the 10-year Treasury’s yield.

“It helps people who are looking to buy a house in the near term,” said Gus Faucher, senior economist at PNC Financial Services Group. “It makes housing more affordable. That’s one reason the Fed decided not to act — to make sure the recovery in the housing market continues.”

Indeed, since May, investors had driven up the average U.S. rate on a 30-year fixed mortgage by more than a full percentage point to 4.57 percent in anticipation that the Fed would slow its bond purchases as soon as this month.

The same expectations for a Fed pullback had caused turmoil in some emerging economies in Asia and South America.

Here’s why: When U.S. rates were super-low, investors moved money into emerging markets in search of relatively higher returns. In recent months, though, the prospect that the Fed would slow its bond purchases and send U.S. rates up led investors to shift money out of emerging markets and into higher-yielding U.S. and other bonds. That shift drove down stock prices and currency values in the emerging markets.

“Global investors are going where they can get the highest return,” PNC’s Faucher said.

The steady pace of the Fed’s bond purchases isn’t going to please savers. Super-low rates have squeezed people who depend on interest income. Americans’ annual interest income fell 11 percent — from $1.36 trillion to $1.21 trillion — between 2008 and 2012, the Commerce Department said.

Rates on saving accounts have become nearly invisible. The annual percentage yield on the average U.S. money market account is 0.1 percent, according to Bankrate.com. The average one-year CD is paying 0.7 percent.

The Fed’s message offered scant hope for people looking for work. Its forecast for economic growth this year is a meager 2 percent to 2.3 percent, slightly weaker than its forecast three months ago. It expects unemployment to remain a still-high 6.4 percent or higher through next year.

“We’re still not satisfied, obviously, with where the labor market, the job market is,” Bernanke said.

He noted that many job seekers have grown discouraged and given up looking for work.

Fed officials have grown concerned that a budget battle in Washington will further damage the economy. Unless Congress agrees to fund the government past Oct. 1, the government will shut down.

Then, next month, the government will reach its borrowing limit. If Congress won’t raise that limit, the government won’t be able to pay all its bills. The risk of a shutdown or default would likely rattle financial markets and could scare businesses and consumers into spending less.

“When there’s all this disruption in D.C., it attacks the confidence of the consumer,” said Frank Sorrentino, CEO of ConnectOne Bank in Englewood Cliffs, N.J.

“A failure to raise the debt limit could have very serious consequences for the financial markets and for the economy. … This is one of the risks that we are looking at as we think about policy.”

The reprieve from a pullback in the Fed’s stimulus is temporary. The central bank is still expected to scale back its purchases at one of its next meetings — in late October, in mid-December or sometime early next year.

That is, if the economy has improved by then.