5 free things in Portland, from parks to markets 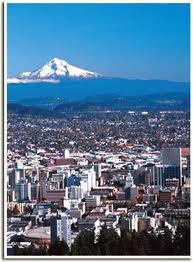 PORTLAND, Ore. — Two decades ago, the city of Portland’s Yellow Bike Project put hundreds of canary-colored two-wheelers on the streets for public use. It was an earnest effort, utterly without bashfulness or diffidence. Then human nature took over and the bikes were variously vandalized, stolen or chopped up and sold for parts.

Today the city is making plans to relaunch the bike-share program. In the meantime, you’ll have to shell out as much as $25 per day to wheel around Stumptown (one of Portland’s nicknames, evoking a bygone era of rapid land development and tree-cutting), but don’t fear. There’s much to do on the cheap in a city where living thrifty is living well.

Step back a decade or two, when bookstores were still a viable enterprise. If Portland, as television’s Portlandia suggests, does keep alive the dream of the ’90s, then Powell’s Books is its muse. People-watch, browse or curl up in one of the comfy chairs: The staff is too busy, the store too massive to worry about lingering readers.

Color-coded by room, the block-long bookstore is a mainstay on tourism guides, with good reason. It’s a haven for used, out-of-print, rare or autographed books. And if you want a collection of Sal­man Rushdie essays on post-colonialism, they probably know exactly which shelf.

Five thousand acres of rolling hills, fire lanes and the simple stillness of the Oregon wild are within city limits, less than a 10-minute drive from downtown. You’ll see committed joggers pounding up hills, rain or shine, but the park is best enjoyed by a slow amble up the Wildwood Trail, with creeks bubbling and chipmunks chittering under a shady conifer canopy. There are occasionally stunning views from what is actually part of the Tualatin Mountains.

The park does its own self-preservation: The silt-basalt soil creates a foundation that’s too unstable to build on, thwarting development. A short drive away is Washington Park, home to the International Rose Test Garden, with more than 10,000 plants. Peak blooming season is late spring through early fall, and there’s a great view of the city from the garden on clear days.

For the daring, the curious and the shameless, Portland’s farmers markets mean one thing: Free tastes. Perhaps it’s the Rogue River Blue Cheese at the Thursday market in Northwest. Or the beef and chicken of Viridian Farms, darlings of the local restaurant scene. Samples of almost everything are made bite-sized and put on a toothpick, and markets can be found nearly every day of the week, anchored by the massive Saturday Market downtown. For a city that prizes things made nearby and without a lot of chemicals, the farmers markets are the heart of Portland.

With all the flannel, unicycles and pour-over coffee (made by hand instead of a machine), it’s easy to forget that Portland was once an Old West town, a fact reflected in its architecture if you look hard enough. The best example is the Pioneer Courthouse downtown, the oldest federal building in the Pacific Northwest. The dark wood of its halls, constructed in 1869, make it a quiet refuge from the busy, adjacent courthouse square. Six blocks east bring you to The Lotus, opened as a “soda bar” during Prohibition built underneath Lotus Hotel, a reputed brothel. The highlight is the antique 30-foot cherry wood bar, made in the late 1800s.

The most Portland part of Portland, the one that inspires the jokes, is on Haw­thorne Boulevard, where you’ll find House of Vintage, Red Light Clothing Exchange and half a dozen other used clothing shops. But you can find more than clothing. Looking for a 1920s antique black glass door knob? Hippo Hardware. Eyeglass frames from Season Four of Mad Men? Hollywood Vintage. You won’t find the cheapest options here – because if it’s not low-cost, it is weirdly authentic. But you don’t have to spend anything to take in the scene: Browsing is free and people-watching is a sport.